What Sprouts Farmers Market Can Teach You About Social

In a world where everyone is offering some widget, gizmo or gimmick that promises to give you Facebook-like viral growth / visibility, I see a lot of social done wrong. While working for startups, I sought out these solutions to help 'get the word out' and in my current role, not a day goes by where someone doesn't try to sell me some social service that'll fix all our problems. So, I feel very comfortable saying that most of the market focuses on how to enable social sharing...in hopes that people will just share whatever content it's attached to. Now, how many of you have added sharing widgets to your website?  How did that work out for you?

Today was different. In the most unexpected of places, I had an experience that I'm going to share with you and, hopefully, you'll see why I was so excited to get home and blog about it.

After picking up my son, we stopped at Sprouts Farmers Market in Hemet, CA (It's where I live, don't judge me). Now, my son Joey has autism and April 2nd was World Autism Awareness Day. He was proudly sporting his newly acquired Build-A-Bear Autism Speaks Bear, just like he is in the picture below. 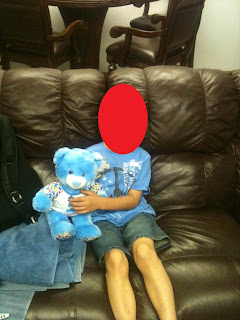 During checkout, I was reaching for my wallet, when Joey told our cashier Yesenia that this was his bear, he cleverly named it "Autism" and that he had autism.  She warmly smiled and commented that she liked his bear.  Then, Joey noticed  that Yesenia's name tag / lanyard had a blue puzzle piece pin on it, much like the one on his bears' t-shirt.  Now, for any of you that don't know, the blue puzzle piece is Autism Speaks's logo.  Honestly, I'm not exactly sure why, but, Joey got SUPER EXCITED.  Then, Yesenia told us how Sprouts supports Autism through Autism Speaks and how, during their recent fundraiser, there were puzzle pieces like the one she had all over the store.  To which Joey replied, "I can paint puzzle pieces all over the store too!" In all honesty, I think he took her explanation as permission and might have even asked her for paint to start drawing on the windows in the front of the store. She smiled and, cool as a cucumber, rolled with Joey, without batting an eye. And then it happened. Yesenia asked Joey if he wanted her pin.  I'm not even sure she finished her offer before Joey said sure. At this point, I was in tears. Then, after almost handing it to him, she realized it was probably better to give it to me, which was very thoughtful.  Especially since she pretended not to notice me crying.

As a parent of a child on the spectrum, you never know what your child is going to do or say, especially in public. But, it's stop phasing you pretty early on. However, you remain VERY sensitive to how other people react to your child's quirky behaviors, especially when you are in a public place, late in the day, when the meds are clearly wearing off. Oftentimes, people react poorly and the only saving grace is that despite the lack of sensitivity, understanding and patience in the world, your child really doesn't understand how terrible the people interacting with them are treating them. Needless to say, Yesenia small act of kindness was an example exactly what to do and I was very impressed.

Instantly, I wanted to take out my phone blow up my Facebook stream, letting everyone know what happened...but what one-liner would do this story justice?  So, I came home, snapped some photos on my phone, sent them to my email account and wrote a blog post.  Seems like a lot of effort, but well worth it for this moment.

As a former Disney intern, I know Disney spend tons of resources drilling this type of customer service into their cast members, under the guise of creating "magic" and they are world-class at it. But, I wasn't at Disney. I was at the grocery store, with my son, in tears, because Yesenia decided she wanted to do something special to make Joey's day and create an experience that this parent and grocery-purchasing customer will never forget. And now I'm sharing this story, on their behalf, because I was so moved that I want everyone to know about what happened to me today and who was responsible for the experience. And that's the key.

The key to social is moving people so much that they feel compelled to share the experience with anyone that'll listen.  Whether it's something funny / clever, emotionally meaningful, visually stunning or cat-related, there are many ways to move people. Social isn't about a button or widget; it's about creating moments worth sharing. 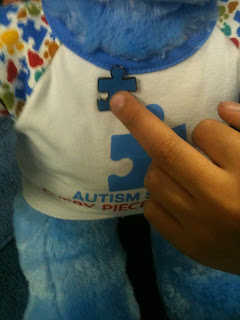